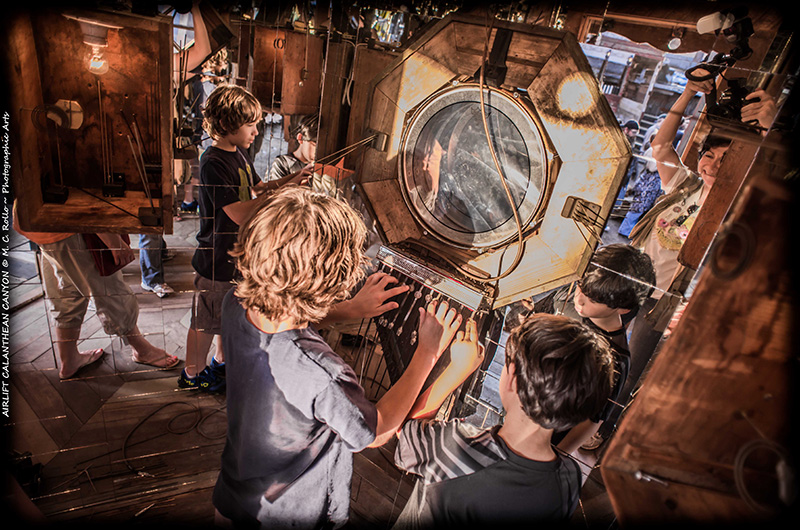 Musical houses in the shadow of the Calanthean Canyon

New Orleans Airlift second outpost of musical architecture was part of the Shreveport Regional Arts Council’s UNSCENE! Residency program. Airlift was so happy to work with over 30 local artists from Shreveport, sharing ideas and building musical houses together. The most exciting element of our project is that our collaborators are now in charge of the installation, creating their own performances and experiences in this new musical village.

Our site was in the shadow of the Calanthean Temple, a building erected in 1923 by the Order of Calanthe, an African-American womens society that held legendary performances by Cab Calloway and others during the heyday of Shreveport’s music scene in the 1940s.

We were also honored to work with a member of The Residents, a cult band whose members have stayed largely anonymous. Rather than join us, we were haunted by a Resident via a video piece and vocals created especially for our project. They were incorporated into a custom built log cabin of the artist’s design created in collaboration with locals Nate Treme and Josh Porter.

Our local team of artists were led by Peter Fetterman who galvanized the most awesome community of artists and musicians ahead of our arrival. Folks like Jon Mackey, whose musical greenhouse perched 20 ft. up on a catwalk built in just three weeks by Jimmy Cousins, along with a spiral staircase and a Thermin whose antenna was a geodesic dome. Josh October got an amazing sound out a barrel-based instrument he had been dreaming about making for years, while Brett Roberts‘ House of God harnessed the power of PVC pipes. Christian Maes made a bottle carillon that was so elegant and we even had a Windmill created by John Martin in collaboration with Laura Thompson.